Mate Of The Werewolf 2 by Ifeoma Isabella Okeke

Abusive Wolf and into the Wolf’s Den:

Camillia was more than pissed off when she tailed her way back home, a grand house on the outskirts of town. This mansion once belonged to her parents, both of which are dead now. Her mother killed her father in a jealous rage when she found out he was cheating on her with a pathetic little half-vampire, half-werecat. She then killed herself afterwards, in front of Camllia and her twin.

“Oh, you’re back”, came the voice of her sister, Eva. She was a lanky female, scrany and weak; her dull blond hair was messy and lingering around her face, and her skin was sorta pale, nothing like her beautiful bronze skin.

Camillia snarled and lashed out at her, striking her across the face with the back of her hand. She was in no mood to deal with her weak and pathetic twin sister. Eva then unleashed a howl of pain when Camillia decided to kick her in the ribs as she lay on the floor, relinquishing some of her frustrations of the pervious encounter.

“Don’t talk to me fool”, she literally spat at her. “Don’t pretend that you worry about me. I know you’re hoping this new werewolf would control me, don’t you?”

“New werewolf?” She wheezed from the floor as she clutched her cheek.

“Yeah. He’s looking for his mate. Which happens to be me, apparently”.

“Are you sure?” Eva whimpered at her.

Camillia slowly turned to face her. Had she really just asked her that question? “Well, who else could he be after?” she asked her twin with a swift flick of her tongue “You?”

She then laughed hysterically at the thought. Pathetic little, Eva, a mate to a werewolf?

“I didn’t mean that way”, Eva tried to back pedal. “I mean, what if he has been going from town to town looking for his mate?”

Camillia stopped laughing and rolled her eyes at her twin’s stupidity. “I’m known as the Crimson Wolf. Jackass. It’s obviious that he’s heard of me and has come to make me his mate. Now stop being a dickward and get me my dinner! Sheesh,what else are you good for?”

Eva simply nodded her head, wincing as she placed her hands on her ribs. She then moved further into the kitchen to get Camillia her dinner like she had ordered.

“You’re not as legendary as you like to think”. Eva muttered,but fortunately for her, Camillia didn’t seem to hear her.

Then, a howl broke through the still of the night.

That stupid shadowy colour wolf was back and he had actually had the gall to encroach on her homely domain! How arrogant and conceited could he possibly be?

Camillia snarled, her hackles rising up as she dashed outside into the night, ready to show the newcomer in town how much of threat she was.

Eva watched as her sister ran into the darkness, forsaking the open front door, instead using the thankfully open window as her leverage to leap off in an overly dramatic way. Her eyes set into a fearsome glare of hatred, her lips pulled back into a snarl.

Her twin sister had changed so much over the years. She was never this cruel or ruthless in their younger years, nor was she ever this violent toward her. Eva really couldn’t point out the moment in time where she changed, but if she hazard a guess, it was a few weeks after their parents died; father was a bank manager while their mother was a teacher at the local primary school. They had both died when she and Camllia were about to turn 15 years old, a whole three years ago now.

After that, Camillia turned rebel and did everything she could to get into trouble and caused trouble for those in the community. Some thought it to be nothing more than a cry for help, but she only grew more reckless.

Especially after realizing their werewolf gifts that their father had placed upon them. She thought of herself as really unstoppable then.

But she was going to get herself killed one of these days,she wasn’t as highly sought after or as powerful as she liked to think of herself to be. She was rude,brash,and really quite irresponsible.

Why Eva continued to stay here, endearing her abuse, but didn’t not know. Maybe she felt it was her duty to try to keep her out of trouble. She was a werewolf too,but she would never, ever strike out at her.

While Camllia tried to dominate and make enemies of the wandering wolves, who happen across their town in secret,Eva much preferred offering them a sense of sanctuary, she wanted to prove to them, to show them that violence wasn’t always the answer.

Wolves, after all, were also renowed for their intelligence, companisonship and loyalty. They weren’t braineless beasts.

A chill suddenly raced up Eva’s spine and a new scent touched her overly-sensitive nose. A scent she had never smell before overwhelmed her, actually, and quite surprisingly, made her feel dizzy with a sense of something she had never felt before.

Whipping around, she found her gaze colliding with that of an unknown wolf’s as she stood, unmarred and alone, in her house. 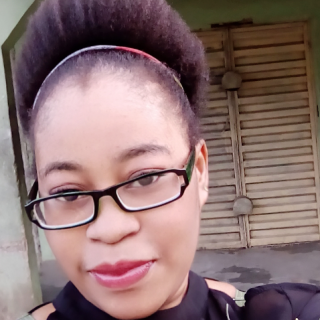 I am a writer, creative thinker and a social media expert. I offer freelance writing services for your fiction and nonfiction works.

Get the Latest Stories in Your Email - Join Our Community